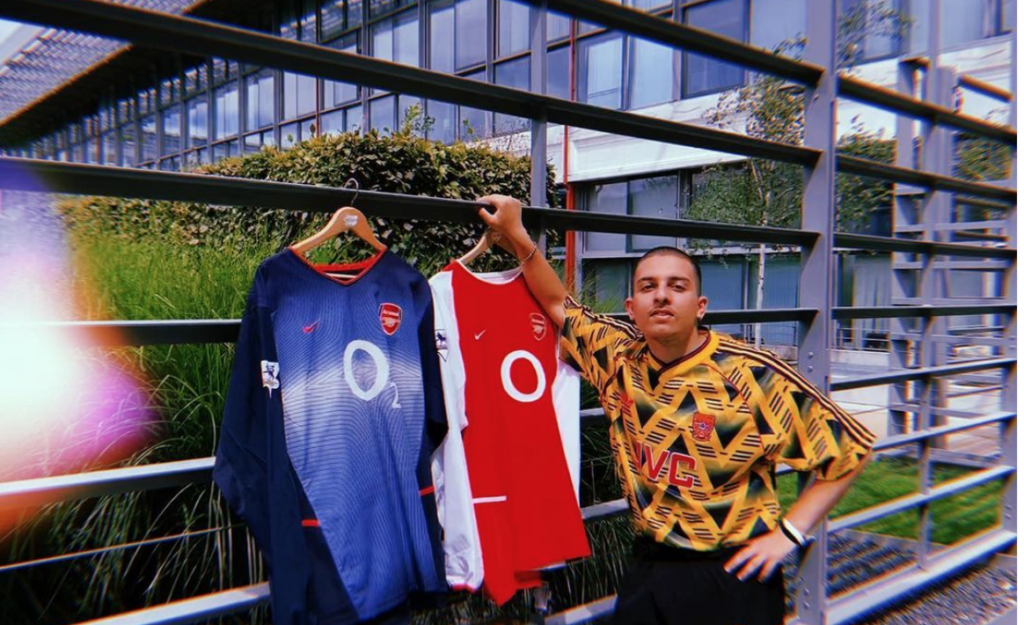 UK: THE LOVE FOR MARTINELLIS SWEAT

The shirts collections among Arsenal fans are growing heavily with Adidas’ collections being hugely popular within the fan group. ‘Rocky Nico’, however, is not your usual Arsenal shirt collector, being in possession of some of the rarest Arsenal shirts that most Gooners would die for.

There’s still a faint smell of detergent hanging around The Tollington, a favourite hangout spot for Arsenal-fans in London, as we prepare to meet up with a guy called RockyNico at the bar. RockyNico is one of the best Arsenal-shirt collectors around town and lives just a stone’s throw from the Emirates Stadium. In his own shirt mecca you will find everything from ‘matchworn’ shirts worn by Gabriel Martinelli and Emile Smith Rowe to special shirts from several FA Cup-finals. Rocky can provide most things and happily shares his passion with the rest of Arsenal’s fanbase. In 2020, he thus started his own webshop in his own name, where you can get both iconic artifacts and almost forgotten Arsenal-shirts.

When Rocky walks through the Tollington-doors, he meets us in his vintage Arsenal jacket with badges and stickers from back when it was allowed to drink beers in the stands around England and Tony Adams and Ian Wright were among all Arsenal-fans heroes. Certainly the nostalgia has made his passion easy to transmit onto other fellow Gooners.

“When somebody sees an old shirt and they want it there is definitely some element of nostalgia like when you see the bruised banana shirt. Not only is it a cool design, it also brings back memories from when players like Ian Wright worn it. There is a element of being closer to the clubs history“, Rocky tells us.

It was all a dream

Rocky himself has been an Arsenal-fan himself for as long as he can remember. His interest for collecting shirts has been part of him ever since, which is why his collection also has gradually gained a considerable size. One of his jersey memories is when he got hold of both the home and awayshirt from the last season at Highbury in 2006. It was also the moment when more people began to recognize his shirt collection. It was not long before more people wanted to buy parts of his collection. What started as a hobby next to his studies has today developed into a full-time job.

“When my customers buy the shirts, they know that they are buying it from a fan. It is like a complete circle, where seller and buyer share the same passion and joy. ”

And the passion doesn´t really have any limits. Rocky sends shirts out to all around world. His inbox on Instagram is filled with wishes from people who want to get hold on a certain shirt and the young Englishman is doing everything he can to excite his customers. It is especially the Arsenal fans across the Atlantic who are eager to land some of Rocky’s rarest finds.

“USA definitely. Next I’d say France, but there is so many places that I would never have imagined shirts go out to. I have also sold a lot of shirts to Singapore, Thailand, Hong Kong and  South Korea. The Arsenal community is much bigger than you could ever imagine.”

This one is going nowhere!

Initially, Rocky was out all by himself to find shirts and other Arsenal memorabilia, but as the popularity of his services only went one way, more and more Arsenal-fans themselves have approached Rocky and offered him to buy their shirts. The shirts therefore often come from other collectors, but sometimes also from other places. For example, he has managed to put together a small portion of matchworn shirts, which he has purchased directly from the club. On the occasion of our meeting, he has taken his Gabriel Martinelli matchworn home jersey from the FA Cup match in January 2020 against Leeds. He shows us the special FA Cup jersey marks and the dirt from the turf. However, when he has to highlight his favorite shirt in his own collections, it is not the shirt he chooses. Instead, a shirt he in no way wants to get rid of is one from the just-concluded season.

“I was so lucky to get my fingers in an Emile Smith Rowe‘ matchworn ’jersey from the 3-1 victory in September 2021 over Spurs. I got it through the club on their website. I was refreshing for weeks and was lucky in the end.”

Rocky wouldn´t dare to wear the very special he got from last season North London Derby. They must has to appear in its own history and beauty. Still, he beliefs that it is important to wear your Arsenal-shirts, even the more rare ones.

“I suppose that when people wear them and put them on and enjoy them, they have pictures in them and people can see they are representing the clubs vintage history wear. When people preserve them and keeping them in the original condition like a very good friend of mine in California, he will show a collage of all the shirts together and they have not been warn. If I had to choose I’d say wear them.”

For Rocky, the hunt for new shirts is a daily journey he embarks on. It is not possible to predict what funny finds are coming up and what opportunities might arise each day. In Rockys view, it´s never boring to look at Arsenal shirts.

“You get an adrenaline rush without equal when you bump into a new cool Arsenal shirt. If you make a good deal you are just super, super happy. Sometimes I have also sacrificed a large chunk of my own savings to get my fingers in a rare collectible. There you get a little extra nervous because you have invested from your own pocket. However, the nervousness quickly disappears as soon as you sit with the sweater in your hands. There is just something very special about it, and it is difficult to find words to describe that feeling. ”

One thing, though, is nostalgia, another thing is the design itself. Here, Rocky, like his customers, is more into the trends of the old days.

“Personally, I like the Personally, I like a high collar a bit like an old traditional kind of one. Most importantly you just have to keep it simple with the colours. I do like patterns, but sometimes simplicity is key.”

Rocky, however, can also recognize great design by rivalry clubs and therefore, he also has a good eye for another English club when it comes to shirts designs.

“Obviously, I always wanted to say Arsenal, but if I had to pick one I’d say Newcastle. The old shirts though, because they got that Juventus old school vibe.”

Rocky assures us, however, that he is not going to sell jerseys with zebra stripes as of now. In fact, never ever. His heart is devoted to The Gunners, and the shirts in his shop will therefore remain red and white.

If you would like to take a closer look yourself at the many good things Rocky has on his shelf, follow him on Instagram or check out his shop.

Gå til nyhedsarkiv
We use cookies on our website to give you the most relevant experience by remembering your preferences and repeat visits. By clicking “Accept All”, you consent to the use of ALL the cookies. However, you may visit "Cookie Settings" to provide a controlled consent.
Cookie SettingsAccept All
Manage consent

This website uses cookies to improve your experience while you navigate through the website. Out of these, the cookies that are categorized as necessary are stored on your browser as they are essential for the working of basic functionalities of the website. We also use third-party cookies that help us analyze and understand how you use this website. These cookies will be stored in your browser only with your consent. You also have the option to opt-out of these cookies. But opting out of some of these cookies may affect your browsing experience.
Necessary Altid aktiveret
Necessary cookies are absolutely essential for the website to function properly. These cookies ensure basic functionalities and security features of the website, anonymously.
Functional
Functional cookies help to perform certain functionalities like sharing the content of the website on social media platforms, collect feedbacks, and other third-party features.
Performance
Performance cookies are used to understand and analyze the key performance indexes of the website which helps in delivering a better user experience for the visitors.
Analytics
Analytical cookies are used to understand how visitors interact with the website. These cookies help provide information on metrics the number of visitors, bounce rate, traffic source, etc.
Advertisement
Advertisement cookies are used to provide visitors with relevant ads and marketing campaigns. These cookies track visitors across websites and collect information to provide customized ads.
Others
Other uncategorized cookies are those that are being analyzed and have not been classified into a category as yet.
GEM & ACCEPTÈR
MENU
{"cart_token":"","hash":"","cart_data":""}